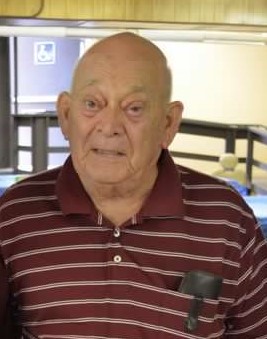 Rex passed away on Wednesday, August 5, 2020 at Bergen Mercy Hospital in Omaha.

Graveside Services will be held on Saturday, August 8, 2020 at 10:30 a.m. at the Rose Hill Cemetery. Military Honors will be conducted by the Shenandoah American Legion Color Guard.

There will be open viewing on Friday afternoon at the funeral home from 1:00 p.m. until 5:00 p.m. The family will not be present. Social distancing and face masks are encouraged.

In lieu of a flowers a memorial is currently being established.

Rex attended school in Shenandoah, Iowa until his family moved to Delmar, California. When he was in the 8th grade, they moved back to Shenandoah, Iowa where he attended catholic school until his sophomore year. He left school to work and help support his family but did earn his GED to aid in his promotion in the National Guard.

He joined the National Guard on May 19, 1947. He reached the rank of Lieutenant before retiring after 35 years of service, where he retired as a First Sergeant.

Rex married Delores Jean Monk on September 30, 1953 in Shenandoah, Iowa where they continued to live. Rex and Delores had five children. Their family grew to include 12 grandchildren and 18 great grandchildren.

In addition to being a member of the National Guard, Rex worked for both Mount Arbor and Lake Nurseries from 1953 to 1973 for a combined total of 20 years. Rex then became superintendent of the City of Shenandoah Park Department where he worked for 20 years before retiring in 1993. Rex never truly retired as he did yard work for others for many years and was a school custodian at Shenandoah for a few years as well.

His love of the military led him to remain actively involved as a board member of the Company E Memorial Armory and helped support and maintain the chapel at the Rose Hill Cemetery. He was a member of the American Legion. One of his favorite day trips was to Offutt Airforce Base, which were made frequently.

Along with his wife, his children, grandchildren and great grandchildren were his number one interest. He loved following all their sports and extra curricular activities, which kept he and Delores hopping. He modeled a strong work ethic for his family. Everyone who knows Rex was aware of his love of trees, plants and gardening. He would spend hours putting together jigsaw puzzles and completing word search puzzles. Western movies, history in general and military history specifically were of great interest to him. He was quite the story teller, sharing his experiences of growing up during the depression and his time in the national guard.

Preceding him in death were his parents, sister Phyllis Jordan and brother Harry Pontious.

In addition he is survived by his sisters Arloa Bryant and Linda Pontious, both of Arkansas. Rex is also survived by a sister-in-law Opal (Dick) Gibson of Twin Lakes, Iowa;, brothers- in-law Gerald Monk of Omaha, Nebraska and Lee ( Vicki) Monk of Salmon, Idaho.

My deepest sympathy to Delores and all Rex’s family. He was a kind caring man who deeply loved his family. My thoughts and prayers for comfort go out of each of you.

I’m sorry I missed you and others when I dropped into the visitation...I was very moved by Rex’s sweatshirt for his Grandchildren and his pins....

I imagine he was not judgmental... unless it was a bad call or play in the field....

People were drawn to him. He had that calm respect....

I took him for granted ...he was soooo quietly kind.

I really wish I’d seen him more later in life.

Thank you and your family for sharing him with us and the town!

I really enjoyed seeing how much in love he was with his wife too!!
Beautiful!
Danne

Our thoughts and prayers for your family

My heartfelt condolences to the entire Pontius family. May the promises of our Savior give you comfort during this difficult time.

My Heartfelt condolences to this terrific family. What a life !! Rex was a kind kind sole and always had time for his family and friends, never a harsh word. He was one of those folks that an individual would feel more enriched and uplifted if you crossed his path. Amazing Father, Husband, Guardsmen, and Fan and Friend . Etc. Kids were never turned away from his home even if he was tired and busy. I believe Rex and Delores were like block parent's before it was a thing : ). A success in life's travels . I loved my visit with him this last fall and he was as excited to see me as I believe he was when I was a little guy, Heaven gets another great one . Bless and Keep Gary Jones

I am so very sorry. He was always so active & is going to be missed by so many people. My prayers are with you & your family.

My heartfelt sympathy and prayers to the family on your tremendous loss, Psalm 90:10 tells us that our life span is 70,80 so he was blessed with this longevity of life and is resting in Gods memory.

Prayers to the family. Rex was a good friend to my mom Anna & her brother Wayne Richardson. I have found childhood memories of the Pontious family growing up in the neighborhood with Pam, Paula & Cheryl.

I worked with Rex as my supervisor for a summer with the Shenandoah Parks Department during college. I remember Rex as a solid man. Kind, hard-working, good sense of humor. Funny how one remembers certain things from the past but I recall him remarking in a joking way about how his water bill had gone up since Rusty and Randy came home for the summer because they showered all the time. :) I wish peace and comfort for the family.

So sorry to hear this Pam and Paula and family. Rex was a great man and hard worker.

Pontious Family: what a good man you all lived with for years. I’ll remember Rex as a hardworking family man. Nothing better. My thoughts and prayers are with you all.

My thoughts and prayers go out to the entire family. Rex was a kind soul and did a lot for the people and community of Shenandoah! As I secured my first real job during the summers, Rex was a great mentor for me and taught me a lot about overall work ethic along with passing on lots of tidbits about overall life values and service above self! I still today will use some of the wise words that Rex passed on to me while I worked for the Parks Dept all those years ago! I am a better person for knowing Rex and his family and i am grateful he was part of my life! I know my sadness will soon turn to happy memories of those summer days working with Rex and that gives me great comfort! God bless.

Delores & family, I am sorry to hear of Rex's passing. My thoughts and prayers are with all of
you. May God grant you Peace and Comfort.

Delores, my sincerest hug and prayers for you!!! My sympathy to you and your whole family. May God give you strength and love and may all your memories hold you steadfast. With God's love. Rawn

My thoughts and prayers are with you during this difficult time.

The attached photos are added to the memorial of Rex W. Pontious to help share their legacy.

Thank you for sharing your memory of Rex